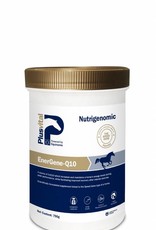 EnerGene-Q10: The World’s First Nutrigenomic supplement for horses based on published scientific evidence

This specifically tailored supplement increases and maintains the energy levels of horses during exercise, with particular benefit for T:T type horses as categorised by our Speed Gene Test.

In a published scientific study*, it was found that T:T horses (i.e. suited to exercise requiring stamina) had significantly lower cellular levels of CoQ10 than C:C horses (i.e. suited to sprint exercise). However, field trials have shown that using EnerGene-Q10 results in increased levels of CoQ10 in muscle cells, which is particularly important for horses requiring increased aerobic energy production.

Benefits from an increase in CoQ10 include:

“Plusvital is leading the way in taking an active research approach in their product development and this new nutrigenomics innovation is intriguing. CoQ10 is of growing interest as a supplement in human health and we look forward to seeing the fruits of Plusvital’s research particularly in our T:T horses”

Add your review
0 stars based on 0 reviews